Nothing seems to be as relaxing as sitting on a bench watching the waves gently roll up to kiss the sand on the beach. Gone are the days when swimsuits and sunburns were the uniform of the day and transistor radios blaring out tunes like "Lets do the twist', Good Golly Miss Molly" kept us dancing in the sand.
One way I love to reminisce is to sit with the love of my life on a bench with the replacement for our old transistor radio, this thing called and IPOD and let it take us back in time with the tunes we loved so long ago. Since I have these gadgets in my ears called hearing aids, I can't use the ear buds so we take along our docking station so we both can enjoy the sounds.
Its amazing how many people stroll by and hear our music and stop, if just for a moment and maybe do a dance step or two. If they happen to be walking their dog. it gives them an excuse to let the animal rest a spell.
As Bob Hope said "Thanks For The Memories", its so nice to have such memories captured that we can have in our treasure chest of dreams. Each tune that plays is like having a slide show in motion going through the brain as I recall the era, the place and with whom I loved each song. Oh, I know today's generation love the music they have even if I can't understand or relate to any of the screaming, I can't help but wonder if fifty years if they will be able to serenade the love of their live with a special lyric they fell in love to.
With all the turmoil going on in this old world, if you want a really relaxing day, try shutting out the negative news media, politics, or personal woes and head for the beach or some secluded place and let your mind go back to a time of happiness with some good old fashioned music!

Posted by Butch at 6:29 PM 2 comments: Links to this post

The world has lost another Hero, one of the few politicians who really cared about the less fortunate even though his family was blessed with wealth. The country will truly miss Ted Kennedy just as much as his brothers who have gone before him. It will be a great task to find one to fill his shoes who can reach across the isle and persuade the Republican party to have compassion for the sick, poor, and elderly. My prayers go out the Kennedy family and all who mourn this country's loss.

"The minute you read something that you can't understand, you can almost be sure it was drawn up by a lawyer."


On account of being a democracy and run by the people, we are the only nation in the world that has to keep a government four years, no matter what it does.
Will Rogers

A conservative is a man with two perfectly good legs who, however, has never learned to walk forward.
Franklin D. Roosevelt,

Today my prayers also go to Carleen, who is going through another surgery. This girl has endured more pain and suffering than most of us will ever know. She never complains, like she says you just deal with what God puts on your plate. She must get her strength and courage from her Mother or from that strong sole standing by her side, the so called'Egyptian Dude'. I can truly understand this strength for I am proud to say that the rock she leans on is my son-in-law.
Posted by Butch at 12:14 PM 2 comments: Links to this post

While exploring the thought of returning to my roots, I decided to look up the latest advertising gimmicks for the old home town. The first search lead me to the Pagosa Sun newspaper, this paper has been the local news media there for over 50 years. A printing once a week keeps the locals informed of all the progress and activities in the town and surrounding areas. The headline that caught my attention was about a new Hotel that was constructed near the hot springs which read "10 million dollar hotel owned by who?" The web site for the hot springs displays some beautiful photographs of the resort and the new hotel which has a base rate of approx. 250.00 a night, something I could never have dreamed of as a youngster there fifty years ago. The story goes on to explain that several of the contractors who built this extravagant place have not been paid and have placed liens against it. The photos I have included here show the way the springs were when my family arrived there in 1945 and the way it was when I left home. The water in the spring is supposed to be the world's biggest and hottest mineral spring. Its a place where as a young teen I attempted to dunk a stolen chicken in to remove the feathers and only a skinless carcass was left.
It seems strange that I can no longer afford to visit my childhood romping grounds where the hills and streams were as God had made and the animals did not need to depend on garbage from residents to survive. Pagosa is still a beautiful place but plan on taking a life's savings if you plan on visiting for any period of time.
Politics,Politics, I sure get fed up with all hipe on the television over this medical reform thing. Personally I think everyone should be entitled to first class medical attention. I don't think the government trying to help the less fortunate is being a socialist, after all I thought the government included all citizens of this country. I may be wrong but I thought Medicare, Medicaid, and the VA were government run programs but no one calls them socialist.
Posted by Butch at 7:07 PM 1 comment: Links to this post

Along with my scrap booking project I decided to dive into my Adobe program and attempt making a slide show of the lives of my two brothers and myself. From a very early age I have always wanted to be just like my older siblings although two years separated each of us.
My oldest brother would have rather not have a little brat brother following in his tracks. He had some strange ways of showing his brotherly love for me. There was the time he invented a little game called "grab the treasure" where all his friends or any kid in the neighborhood could join in. The only requirement was that what ever each individual treasurer-ed, items such as pocket knifes, marbles, balls of string, chewing gum, spinning tops, etc. would all be place in one pile. A bucket then placed on top and everyone would go hide and count to a hundred then run as fast as possible to grab all the treasure under the bucket when big brother lifted it. No one knew that as we all hide our eyes he replaced all the treasures with slimy garbage and somehow he made sure I would be the first to get to the bucket. Once when we lived in Texas as I was just a bare foot child he made a dummy of old clothes, stuck a knife in it and poured catsup over it to scare me.
As we grew older and both had jobs working in the local theater in Pagosa Springs Colordado, he ran the projectors and I took tickets. I couldn't understand why every Sunday matinee some one would be waiting to fight me, as I found out later my dear brother was taking bets with the local kids to see who could beat me up.
The middle brother "Jerry" was always my best friend and we tried to be each others care taker. He was my mentor when I tried to keep up with the older boys on the football team and covered up for my bad behavior so my parents wouldn't find out.
When the two brothers left home and joined the Navy my heart was broken and I felt so abandoned. With no one left to keep me out of trouble, I found plenty to get into and broke my Mother's heart, I'm sure. As I tried once more to follow in their footsteps, I joined the Navy too, and my basic training took me to Great Lakes where brother Jerry was in trade school. He was there throughout my boot camp and helped me learn the Navy way of doing things. Upon completion of my basic training, I was assigned to a minesweeper that just happened to be the same one my oldest brother was on and we served together for two years.
I hope that as I complete this endeavor and leave a photo record it may be enjoyed by those I leave behind.
Posted by Butch at 9:00 AM No comments: Links to this post

While searching for some sort of hobby to occupy this old mind I decided to make another attempt at scrap booking. I remembered as a child how I loved to visit my Grandmother, this was a period of time when televisions were unheard of. We spent our treasured visits by siting in front of the old Philco radio and listening to stories like "Fiber McGee and Molly", or her telling stories of her youth. Other times I would sit on the floor in her bedroom and empty the bottom drawer of her dresser which held a treasure full of photographs. Yesterday while going through stacks of old photos handed down to me I drifted back to those special moments and still wondered just who the folks were in some of her old photos, the trials and tribulations these people went through somehow has given us hope over many years.
What wonderful progress has been made over the years to preserve our treasured past, things like visual recordings and digital photos. I recall how excited my father was when he acquired a box full of glass negatives made in the the early 1900s and was able to bring to life the images, now images are stored on computer disks that one day will be obsolete and children will no longer be able to thumb through stacks of family history or hold in their hands images of their ancestors.
Posted by Butch at 7:17 AM 2 comments: Links to this post 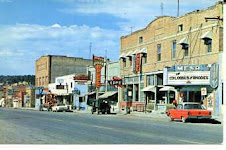 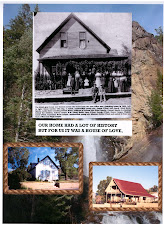